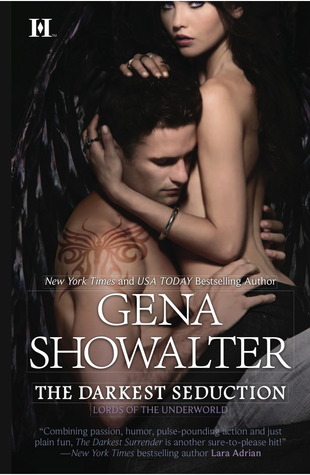 At long last, New York Times bestselling author Gena Showalter unveils the story of Paris, the darkest and most tormented Lord of the Underworld.

Possessed by the demon of Promiscuity, immortal warrior Paris is irresistibly seductive — but his potent allure comes at a terrible price. Every night he must bed someone new, or weaken and die. And the woman he craves above all others is the one woman he’d thought was forever beyond his reach… until now.

Newly possessed by the demon of Wrath, Sienna Blackstone is racked by a ruthless need to punish those around her. Yet in Paris’s arms, the vulnerable beauty finds soul-searing passion and incredible peace. Until a blood feud between ancient enemies heats up.

Will the battle against gods, angels and creatures of the night bind them eternally — or tear them apart?

“By the way, only a real man can accept his feminine side.”
“I don’t know who fed you that line of garbage, but I can promise she’s laughing at you right now.”

MAJOR SPOILERS THROUGHOUT:
Well that was unexpected…
I have been putting this book off for months because I didn’t think I would like it. Paris and Sienna’s story has been unfolding for many books now and their story just hadn’t grab me as much as other couples’ stories did. I thought about skipping this book altogether, but I knew that I would miss out on a lot of the over-arching story line if I did. So, I took a break from this series for a few months and finally decided to pick it back up again…

And let me tell you: I feel like a complete IDIOT. This book was phenomenal! I have seriously no complaints. I started this book and I couldn’t put it down. Paris and Sienna’s story, as well as ALL of the side characters’ stories, had me enthralled. The pacing was spot on and I wasn’t bored for even a moment. I cried, I felt anger and frustration over what was happening to the characters, and I laughed my ass off. I forgot just how much humor was in these books.

Paris- I have always liked Paris. I felt bad for him because he had been watching all of his friends fall in love and he knew he could never have the same thing that they had.. Or so he thought. Sienna came crashing into the picture and he couldn’t let her go. I was so happy for Paris when he found her and my heart broke for him when he lost her. He spends many books doing nothing but try to get her back and in this book, we see the true lengths he will go to to have her in his life. I was in awe with him throughout this whole book and I have never loved him more.

Sienna- I never got the much of a read on Sienna’s personality in the previous books. She would pop up her and there but I never saw a steady development of her character’s personality until this book. I must say: I love Sienna. She had all of the components needed for a great female character and then some. She’s strong, yet knows when to ask for help. She shows her emotions but does not let them rule her every action. She’s just a flat out good person that wants to see the good in people and make the world a better place. She truly stole the show for me.

Zacharel- Just give me any and all information you have on him please. I’m dying here. Plus, getting a love interest smacked over his head would be nice.

Viola- I know a lot of people probably find Viola annoying and unnecessary, but I don’t. I actually quite enjoy her character and I loved what she brought to the story. That scene between her and Legion was one of my favorite scenes from the whole book.

Legion- I’m not gonna lie, I have had a rocky road with Legion. From loving her to despising her to wanting to protect her with all of my being. But… she truly shined for me in this book. The decision she made to go to Galen showed me how far her character has come and I have never loved her and appreciated her more.

Galen- I saw a lot more humanity in Galen than I ever thought possible during this book. He has a second demon!? I was shocked. Plus, he seemed to genuinely care about Legion and Gwen. Is it possible that he isn’t as bad as he had been made out to be? I guess I’ll find out since he is under the Lords protection for the next two years… That should be interesting.

Winter, Cameron, & Irish- I feel like I got barely ANY information about them, yet I am already hooked. I NEED more of these characters and I am praying to anyone that will listen that they are in future books.

Ever & Urban- I have NO idea what these two are going to do the story, but I know that it’s going to be great and flip this series on it’s head. Plus, did anyone else catch the fact that Ever made complete goo-goo eyes at William and glared at Paris when he tried to take her away? Just a thought since I know he doesn’t end up with Gilly.

Cronus & Rhea- I’m so glad their dead. No regrets on my end.

Overall, this was one of my favorite installments in the whole series. It was just so good and I hope that Gena Showalter can stay at this high that she seems to be on right now. Of course I will be continuing the series and I can’t wait to start the next book!