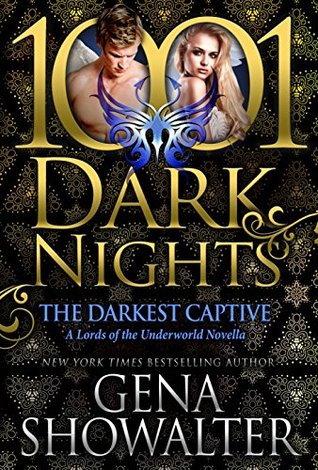 For centuries, Galen the Treacherous has been the most hated immortal in the Underworld. With good reason! This bad boy of bad boys has lied, stolen, cheated and killed with abandon. Possessed by the demons of Jealousy and False Hope, he has always lived for a single purpose: destroy everything.

Then he met her.

Former demon turned human femme fatale — Legion Honey — sought to kill Galen, but ended up parting with her virginity instead. Afraid of their sizzling connection, she ran away…and ended up trapped in hell, tortured and abused in the worst of ways. Now she’s free, and a shell of herself, afraid of her own shadow.

Galen’s hunger for Legion has only grown. Now the warrior with nothing to lose must help her rekindle the fire that once burned inside her. But as desires blaze white-hot, will Legion run again? Or will the unlikely pair succumb to love at long last?

**Every 1001 Dark Nights novella is a standalone story. For new readers, it’s an introduction to an author’s world. And for fans, it’s a bonus book in the author’s series. We hope you’ll enjoy each one as much as we do.**

“After all, the harder you fought for something, the more you proved its worth to you.”

MAJOR SPOILERS THROUGHOUT:
I liked this book. It was a nice little novella to add to the series. It set a few things up and revealed some things that I hadn’t known before so I am happy that I read it.

Legion & Galen- Their story has been a long time coming and the only complaint I have is that I wish it would have been longer. I wanted some more development of their relationship than what I got. I did like their character development separately though. Legion went through a big arc in this book and Galen changed as well. It really showed too.

Gwen & Galen- I’m glad that they are on the road to forgiveness. I’ve been wanting them to get to know one another for a while now.

Fox- She’s a Gatekeeper huh? I like it. Plus I’m interested in seeing where her story is going to go now that the Sent Ones will be searching for her.

Overall, I enjoyed this book and I will be continuing this series. How could I not when William’s book is next? I might read Viola’s book but I can’t think of anyone else that I would be interested in reading. After that though, I just don’t know. This series isn’t what it used to be for me.