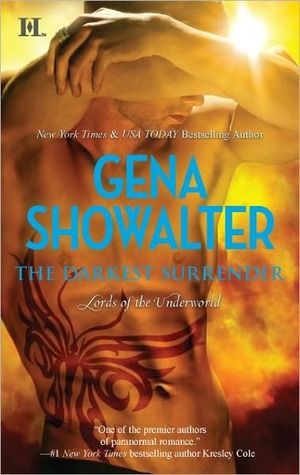 Possessed by the demon of Defeat, Strider cannot lose a challenge without suffering unimaginable pain. For him, nothing stands in the way of victory. Until Kaia, an enchanting Harpy, tempts him to the razor’s edge of surrender.

Known among her people as The Disappointment, Kaia must bring home the gold in the Harpy Games or die. Strider is a distraction she can’t afford because he has an agenda of his own-steal first prize, an ancient godly artifact, before the winner can be named. But as the competition heats up, only one prize will matter-the love neither had thought possible…

I liked this book. It was fast paced and constantly had my attention. While it isn’t my favorite installment in the series, I still had a lot of fun while reading it.

I liked Kaia. I love the whole Harpy plot line and I love learning more about their culture and their traditions. I loved her courage and her wit. She always had a come back and I enjoyed the banter between her and Strider. After learning Kaia’s back story, I felt really bad for her and I wanted her to redeem herself. I am glad that she had the opportunity to do so.

I liked Strider. Sometimes, I rolled my eyes because he was a little too overconfident, but it didn’t bother me enough to take away from my enjoyment of the book. I am glad that he and Kaia are together because I feel like she challenges Strider and ultimately makes him a better person.

Overall, I did enjoy this book. I love the story behind the concept for the series and I will definitely be continuing it. I am excited to read the next book, The Darkest Seduction.