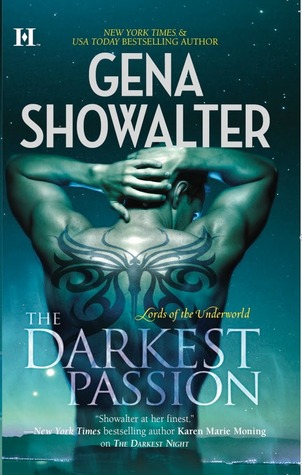 For weeks, the immortal warrior Aeron has sensed an invisible female presence. An angel-demon-assassin has been sent to kill him. Or has she? Olivia claims she fell from the heavens, giving up immortality because she couldn’t bear to harm him. But trusting – and falling for – Olivia will endanger them all. So how has this mortal with the huge blue eyes already unleashed Aeron’s darkest passion?

With an enemy hot on his trail and his faithful demon companion determined to remove Olivia from his life, Aeron is trapped between duty and consuming desire. Worse still, a new executioner has been sent to do the job Olivia wouldn’t…

Because you aren’t who you think you are. You aren’t what everyone else believes. You might have delivered countless deaths but you love more fiercely than anyone I’ve ever known.”

SPOILERS THROUGHOUT:
I loved this book. The plot was fast paced and flowed very well. I enjoyed seeing all of the old characters and meeting the new ones. This book took me on an emotional roller coaster let me tell you. One minute, I was so angry I wanted to scream at some of the characters and the next, I was crying my eyes out.

I loved Olivia. I knew without a shadow of a doubt that she was good. I admired her strength and determination throughout this book. I loved watching her grow and learn to deal with her now human traits. I enjoyed watching her grow more confident in herself and I loved every minute of her attempts to seduce Aeron. To be an angel one minute, fall, then endure what she did, you would have to be an unbelievably strong person which is what Olivia was.

I really liked Aeron. He was a little stubborn in the beginning and I wanted to punch him now and then, but I still liked him. One thing that annoyed me to no end was his blind spot when it came to Legion. I liked Legion before starting this book, but her actions were completely selfish and childish. There were many things that happened in this book that wouldn’t have if Aeron would have explained to Legion that he only saw her as a daughter and if he would have been more stern with her regarding their relationship. I was surprised at how much guilt Aeron felt because of his actions. Aeron really tortured himself because of the actions Wrath led him to do throughout his life. I thought that his character development was good with a drastic difference from where the book started to where it ended.

Overall, I did enjoy this book even though it brought me through the emotional wringer. I am curious about William and Gilly because it did seem like William wanted her at certain points in this book. I look forward to finding out more. I am very interested in finding out more about Scarlet and Gideon’s relationship. I understand that their book will be next so I am very excited.