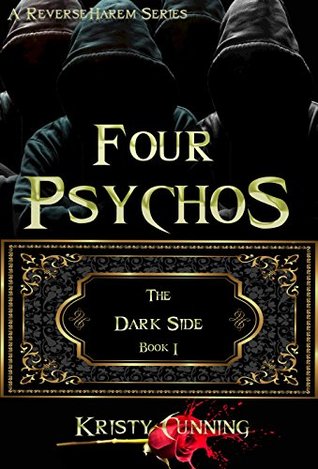 ∴ Four Psychos (The Dark Side #1) by Kristy Cunning ∴

I’m not so different from most people.
Like everyone else, I have life goals.

Goal #1: Become a real girl instead of this invisible ghost thing I currently am.

Goal #2: Convince the four men I’ve been haunting for the past five years to pick me to be their new toy after goal one is complete.

Goal #3: Figure out who/what I am and why I can’t remember anything past the five years I’ve been haunting this quad.

See? Perfectly normal. Sort of.
Gotta start small, after all.
It’s not like anyone else is perfect either.

I interrupt Kai, since it’s my turn to talk. “There are two types of people,” I say to him, and he narrows his eyes on me. “Those who listen, and those who merely wait for their turn to talk.”

MAJOR SPOILERS THROUGHOUT:
I. LOVED. THIS. BOOK. It was fast paced, constantly had my attention, and I could not put it down for the life of me. The plot was enthralling and I was hooked immediately! The time just flew by while reading and, before I knew it, I was done.

Keyla- I liked Keyla and I really connected with her. One of my biggest fears is to be alone or to wake up with no one there to see me. Keyla had to live through that for five years. I can’t even imagine how lonely she must have felt and it makes me sad to think about. I wanted her to experience being real and hearing her talk about simple things that I take for granted (like the ability to touch things) made me feel so bad for her. She really is a good person and I enjoyed being in her head. I didn’t appreciate how the guys treated Keyla in the beginning. Watching them siphon away from her when they knew she would fade made me incredibly sad for her and it really made the guys come across as assholes.

Jude- I don’t really know how I feel about him. He is so hot and cold that it is hard to figure him out. I understand why he acts the way he does towards Keyla, but I don’t understand why he continues to do so after all that she did for him and his friends.

Ezekiel- I loved Ezekiel so much and I just wanted to hug him! He actually gave Keyla a chance and I feel like he is the only one that even tried to get to know her. That really endeared him to me.

Kai- Kai got on my nerves a lot in the beginning with his pompous attitude. He just came off really entitled and I didn’t like the way he treated Keyla. Fortunately, she knows how to knock him down a peg or two.

Gage- I don’t really know how I feel about Gage. I felt like his personality was the least developed out of the guys and that makes it hard to form an opinion on him. He didn’t do anything to tick me off so I suppose that’s a good sign.

Lamar- I liked what I got to see of his character and I really want to see more of him. I also want to learn more about his abilities and what makes him so powerful.

Manella- I am SO glad that he didn’t end up being the villain (or at least not yet). I feel like villainous characters are a lot more compelling when you see why they are that way instead of just being told that they are evil for no reason (which Manella was). The guys just tell Keyla at the beginning that Manella was the bad person that was out to get them and we were supposed to automatically believe it and hate him. I like how things turned out a lot better.

Lucifer- I was so excited when he showed up. He is such a more compelling villain than Manella ever would have been. There are just so many facets to his character and I like the idea of never knowing what side Lucifer is truly on.

Harold- I am kind of suspicious of him, to be honest. I mean, he is supposed to be this all powerful Elder, yet he couldn’t tell whether it was actually Lamar that stabbed him? That is just really fishy to me. The guys were wrong about Manella so maybe they should be more skeptical of who they trust; Harold being one of them.

What I Liked- Pretty much everything. The devils/angels/demons/reapers thing has always intrigued me and I felt like this book brought those aspects together perfectly. The world was described so vividly and I can’t wait to see more of it.

What I Didn’t Like- I didn’t like and still don’t completely understand why the guys and Keyla won’t just suck it up and get together already. They know that they want each other so why don’t they just act on it already?!

Honorable Mentions- That first chapter! That was the most entertaining first chapter I have ever read and I was hooked from the very first page. It started immediately with a bang *winks ridiculously* and was just so captivating.

Overall, I really enjoyed this book. I will be continuing the series with, Three Trials and I can’t wait to start reading!