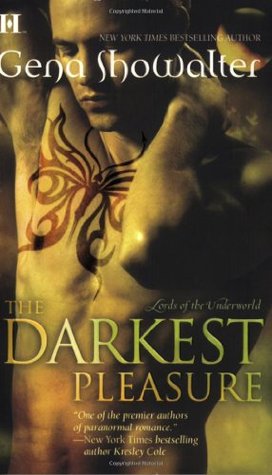 Reyes is a man possessed. Bound by the demon of pain, he is forbidden to know pleasure. Yet he craves a mortal woman, Danika Ford, more than breath and will do anything to claim her–even defy the gods.Danika is on the run. For months she’s eluded the Lords of the Underworld, immortal warriors who won’t rest until she and her family have been destroyed. But her dreams are haunted by Reyes, the warrior whose searing touch she can’t forget. Yet a future together could mean death to all they both hold dear….

We must fight for what we want or it will be taken from us.”

MINOR SPOILERS THROUGHOUT:
I loved this book! It is the best in the series so far. It is was fast paced and constantly had my attention. We got some new characters while also getting to see more of the characters we already know. I feel like the more of these books I read, I just get drawn deeper and deeper into the world. I love the characters and the story more and more each book. The concept is so unique and brilliant.

This was Reyes’s book. I loved him as a main character. I felt so bad for him because his demon is Pain and he can’t go long without having to inflict self harm to get relief from the demon. In fact, the opening scene is of him jumping off a building to make his demon settle down. He has so much guilt and self hatred it is unreal. A big part of him wants to just end it all. He met Danika in the first book and, since then, he hasn’t been able to get her out of his head. She soothes his demon and I just loved that. I felt like the author make it for realistic that while Danika reduces the amount of cutting, he still has to do it. I felt like that was different and made the book a lot more believable.

Danika is amazing. She is so strong and has grown so much since book one. She used to be meek and frightened of everything but not anymore. She actually stood up to Reyes and told him no. In fact, at one point, she broke his nose! I can honestly say I have never read a book where the main girl intentionally broke her love interests nose. I admire her strength and her willingness to live. I also admire her passion and the lengths she will go to protect the people she loves. I can’t wait to see more of her in the future.

I have to say that I have a new favorite character… Legion! I absolutely love her! When she first showed up to Aeron I was like WTH?! but she grew on me as the book went on. She is so protective of Aeron and he of her. It is so adorable. Danika does mention at the end of the book that she feels sorry for whatever girl tries to get close to Aeron because of Legion. This makes me wonder if Legion will be Aeron’s love interest? She does soothe him just by being in his presence. Will she get a human form later in the series and be his girl?

Another character I found myself loving was Gideon. I don’t know why but something about him just draws me in. Even though all he can say are lies, whenever he talks, I find myself laughing. I can’t wait for his book. I need it SO bad! Honorable mention: I am really proud of Paris. That decision he made at the end was a heartbreaking one and if I were in his shoes, I don’t think I would have the strength to make the choice he did.

Obviously, I love this series and I will be continuing!