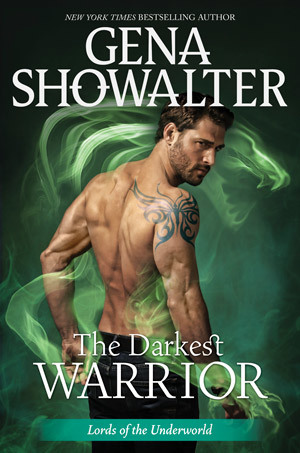 A searing Lords of the Underworld tale by New York Times bestselling author Gena Showalter, featuring a beastly prince and the wife he will wage war to keep.

Puck the Undefeated, host of the demon of Indifference, cannot experience emotion without punishment, so he allows himself to feel nothing. Until her. According to ancient prophecy, she is the key to avenging his past, saving his realm, and ruling as king. All he must do? Steal her from the man she loves—and marry her.

Gillian Shaw has suffered many tragedies in her too-short life, but nothing could have prepared the fragile human for her transition into immortality. To survive, she must wed a horned monster who both intrigues and frightens her…and become the warrior queen she was born to be.

As a rising sense of possession and obsession overtake Puck, so does insatiable lust. The more he learns about his clever, resourceful wife, the more he craves her. And the more time Gillian spends with her protective husband, the more she aches for him. But the prophecy also predicts an unhappily ever after. Can Puck defeat fate itself to keep the woman who brought his deadened heart back to life? Or will they succumb to destiny, losing each other…and everything they’ve been fighting for?

UHHHHHH. I wanted to like this book. You have no idea how much I did. I tried to put my personal feelings aside and tried to be open to Gilly and Puck. I tried SOOO hard!

It didn’t work out. I didn’t like this book at all and I knew I had to quit. I just didn’t care about Gilly and Puck’s relationship and I wasn’t into their romance AT ALL. I spent the 30% that I read, feeling sad for William and wishing for what could have been.

I learned something from this book despite DNFing it. If I ever write a book, I will follow through with my ships. I won’t tease a ship forever and then completely flip everything around. It’s not fair to the reader and breaks fandoms apart. That’s something I just won’t do.

I still like this series and I will keep reading it. I am moving on to Galen and Legion’s book next and I am SOOO excited about it. Then later this year, William’s book is coming out and I can hardly sit still from all of this anticipation. I know it’s gonna be great. Even better than if he would have ended up with Gilly.