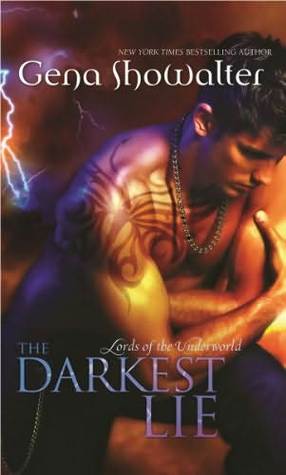 Forced to his knees in agony whenever he speaks the truth, Gideon can recognize any lie – until he captures Scarlet, a demon-possessed immortal who claims to be his long-lost wife. He doesn’t remember the beautiful female, much less wedding – or bedding – her.

The simple fact was, he loved her. Loved her with every breath in his body, every cell in his blood, every bone and organ he possessed. He loved her to the depths of his very soul. Had only taken five minutes after she’d walked away to realize it.”

I loved this book. As usual with this series, the plot was fast paced and flowed really well. I enjoyed seeing the old characters and the new. I got to be in Amun and Strider’s heads which was new but I really liked it. I love any glimpse of the Lords of the Underworld whose stories have not been told yet. I am very interested to see where their stories are going.

I liked Scarlet. I thought she was a little stubborn considering, in her mind, her and Gideon had already had a relationship. Why she was stubborn was understandable though so I didn’t let that affect my enjoyment of the story too much. Besides that, I thought she was extremely strong and brave. She never backed down from a fight even when the odds were against her. I enjoyed having a main character that was possessed by a demon but wasn’t one of the Lords. I found it really interesting and hope more main characters are like that in the future.

I liked Gideon. I thought that he was really honorable and loyal considering he was possessed by the demon of Lies. He was strong willed and I liked how he didn’t take no for an answer when it came to Scarlet. I will admit that one thing I didn’t like about Gideon was constantly trying to figure out what he meant. He can only speak in lies so I would have to decipher what he was trying to say every other sentence which got a little annoying.

Overall, I enjoyed this book. I love this series and every time there is new character development. Whether that is with new characters or old ones. I will definitely be continuing the series. I am pretty sure Amun is next and I am excited to read his story after seeing what happened to him in this book.