Hello Lovelies! I was given the wonderful opportunity to interview one of my favorite RH authors, Brandy Slaven! I learned a lot about her personally and got some inside info on her upcoming releases! You can find out more about her, her books, and what we discussed below:

I was Georgia born and raised, now residing in the great state of Tennessee. True southern girl at heart. I have a wonderful supportive husband who, no lie, I honestly believe is my soul-mate. My two wild children consists of an 11 year old mini ball player and 5 year old little princess. We can’t forget about my fur baby, Primrose. She’s a Boxer/Boston Terrier (picture a tiny boxer) and yes she was named after a character from one of my all time favorite books, see if you can guess.

Lately, I’ve been glued to a screen writing. When I need a break you can find me hiking with the hubs at one of the many state parks, or if we have a long weekend, at the beach or in the mountains. I love all kinds of music and movies. I must say most of my favorites lists on both consist mostly of 80’s stuff. My favorite hobby is and will always be reading. I read every genre, but I am definitely a post-apocalyptic and paranormal freak. You’ll more than likely find me biting into a vampire novel or devouring a zombie book. Have more questions that I didn’t answer? Feel free to contact me via email or anywhere on social media. ~Courtesy of Brandy’s About page on her website 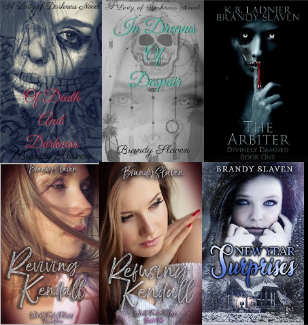 Here are Goodreads links to each of Brandy’s books if you want to check them out yourself:

Years ago, I read these books based around this one small town. Within were all kinds of relationships that were accepted as a natural part of society. Normal even. I honestly think that’s what started my RH acceptance/obsession. Then, years later, I found myself wanting a kickass vampire with her own harem. There weren’t any that I could find, so I wrote one.

My favorite parts to writing a story is always going to be letting the imaginary characters inside my head come out to play, hoping people enjoy them as much as I love writing about them. The easiest part for me is always the beginning and end. The in between stuff is harder for me. The process itself…. write every SINGLE day. Even if I don’t get many words in. If I don’t, I get distracted and binge TV Shows or books.

I can’t really say that there has been any particular person that inspired a character. However, there are a lot of places that will inspire a scene in a story. Such as Mel’s dream at the beach boardwalk in the first Lady of Darkness. On vacation I happened upon one, and decided right then and there that it was going to be a setting somehow.

This is really difficult and not just as a question. Everyone has their own opinion as to what makes a good book. Some people like funny. Some like the suckerpunch to the feels. Others like midnight dark. I’ve had to learn to accept that not everyone will like my books and that’s ok! I allow the characters to speak and write their own stories. I step in occasionally to say, “Nah that won’t work,” or “Hell yes, I like where you’re going with that.” This will likely make me sound insane, but I treat my characters like real people, putting myself in their shoes.

Honestly? I try to leave all content for the reader to get the full effect of what I may have been feeling at the moment. Have I gone back after edits and added a scene or extended a scene? Yes, lol.

Another difficult question, because anyone who knows me, knows I don’t ever pick favorites. I loved writing Mel from my Lady of Darkness Series, because she is a kickass female who accepts life as it comes to her and is willing to go straight to battle for the ones she cares about. The second book in that series follows Alivia, and there’s some really dark stuff that made her a super interesting character to try and share headspace with. Imma from New Year Surprises was so much fun. She’s quirky, sarcastic, and down right awkward and I love it. That cast will be getting a full length novel coming January 2020, and I cannot wait to write with her again. Kendall from my White Trash Trilogy was probably one of the most real characters ever to take a place amongst the many in my head. Her story touched a place in my soul none of the others have. Just the fight she has to put forth is one that a lot of people struggle with every day. Hopefully her story has helped at least one person realize that it can get better. Never ever give up. Last but not least, every single one of the main male characters will always hold a special place in my heart. My personal harem has been well over the double digits for a while now lol. Secret interview reveal…there has been only one set of people that were based off real life people. The band in Lady of Darkness when I first started writing was an actual band. Before publishing, I changed everything up. I wanted them to play a larger part in the books with no reference to the real world.

Names are very, very important. It can make or destroy a character I feel. I’m always careful picking them. With the genre getting so large, it’s hard to avoid clashing with others. However, it’s like the real world. Do you know how many Brandy’s I know? Lol I can honestly say, I’ve never changed a name due to characteristics, or morphing of their story.

This one takes us back to the response on question four. I don’t find it particularly difficult writing about, or in the guy’s POV. They’re all different people to me. They all have their own quirks and faults like we do.

I’m most certainly a reader first, but I try not to let anyone influence my style. Do I strive to be on the same level as some of my favorite authors? Definitely! Do I want to write like them? No ma’am! It’s one of the things that makes a book grand to me, individuality and uniqueness.

The most important one will always be to the readers. Without them, I couldn’t do what I love. I’ll never stop being grateful for them. My very first book Of Death and Darkness was dedicated to my father. He was always my biggest supporter of finishing it and trying to get it published. Unfortunately, he passed away before he was able to see it happen. I finished it within a year, publishing, and dedicating it to him.

My advice for new authors? Write! If you have a story sitting in your head, on your chest, or within your soul, write it. Never doubt yourself and remember, we’re all different. There’s always going to be one person out there who doesn’t like it. Don’t let that influence your decision on giving up.

Ha! That’s a loaded question. I just finished the last book in the White Trash Trilogy. It should be releasing at the end of April. I’m rewriting the Lady of Darkness Series seeing as it was my first books and all. I’ve learned so much in the past two years and want to make it better. They’re being revamped inside and out, hopefully to be released by the end of May. I’ve got a couple anthology stories in the works that’ll be out this year. One or two co-authored projects, with no due dates as of yet. I’m writing a standalone releasing in October. Keep your eyes peeled for that one, because it’s going to be a doozy. Then there is a series and a saga that I’ll be working on for release in 2020. Many exciting things happening soon!

That’s it Lovelies! I am so grateful that I was given this opportunity and corresponding with Brandy was just a dream come true! I hope you learned something about Brandy and her books from this interview or maybe just found a new author to read!

I have a deep passion for the RH genre. It is small right now, but gets bigger by the day and I am so happy that I got to spread it a little today! ~𝒜𝓊𝓉𝓊𝓂𝓃