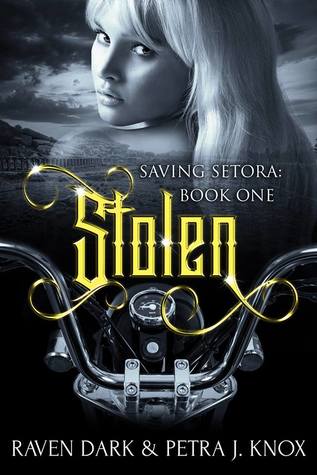 It all began when the road warriors found me outside Hell’s Burning, lost and dehydrated. When the bikers took me into The Compound, I thought I was saved.

Especially when, as a Violet—a rare genetic anomaly prized above all—I’m taken in and raised by one of the wealthiest men in the world. Educated and groomed by the best teachers money could buy, I mistakenly thought he had a great future planned for me, one in which I’d be cared for and cherished.

For centuries, women have been sold as slaves. In my 18th year, my benefactor reveals a truth that shatters my world. I’m to be put on display before the wealthiest of society at one of the biggest auctions this world has ever seen…as a slave.

But that night at the auction, something goes wrong. I am stolen by members of the infamous Dark Legion, a road warrior crew feared the world over. Torn from the only world I have ever known, now I have not one master, but four.

I shouldn’t want these dangerous, deadly men with their leather cuts and their growling bikes, but the deeper my captors draw me into their dark and twisted world, the more I crave what they do to me. They stole me from a powerful man who’ll stop at nothing to get me back. If I don’t find a way to escape soon, my new masters might just steal my heart.

***Stolen is Book One of the Saving Setora series, a dark, dystopian Reverse Harem romance with biker tones. There is no cheating, and the final book ends with an HEA for Setora and her four men. This full length novel contains triggering elements and four twisted heroes who know how to own a woman right.

This book…. oh this book… It had SOOO much potential and the authors could have done so much with the story. Unfortunately, the way they decided to go was all wrong.

You see, I’m trying not to completely rant and be mean to the authors with this review. So with that being said, all I’m going to say is that I did not like this book. At all. I found the main male interests to be highly abusive, sadistic, and Setora’s relationship was unbelievably unhealthy. To illustrate how messed up her relationship with them was, I am going to share this quote:

“My masters were monsters, but they were my monsters, and they’d protect me from far, far worse ones.”

After reading that quote, do I really need to give any other evidence to show how wrong these men were for Setora? I am a hopeless romantic and I let a lot of things slide when it comes to morally grey male characters, but this book pushed even ME over the edge. I just can’t do it and I will definitely not be continuing the series.