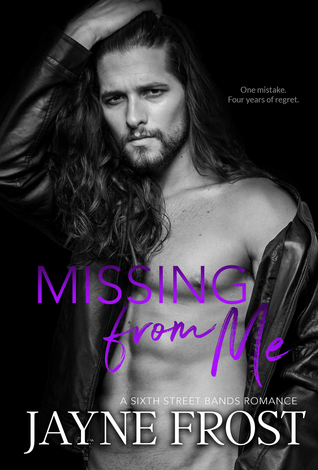 One mistake. Four years of regret.  A second chance worth fighting for.

When I traded one dream for another, she was the price. My Anna. But I never forgot her. Never let go. And no amount of drumming could drown out my love for her. Her music is in my head.

And when I see her again, it’s so clear. Anna is mine. She’ll always be mine. I just have to convince her.

Missing From Me is an epic story about second chances, redemption, undying love, and music. Because every great romance deserves a soundtrack.

MAJOR SPOILERS THROUGHOUT:
This book hurt.. and I mean HURT. I went on a roller coaster of emotions while reading this book. My heart kept getting torn out of my chest, put back in, and then ripped out all over again. The story of Anna and Sean just gripped my heart and I could not stop crying. Every time they went through a bump in their relationship, I was right there with them getting my heart broken.

“Love wasn’t enough. Not then and not now. But it was a start.”

This book is about two broken people who have made a lot of mistakes and the path to them both finding their way back to each other is a long and hard one. This book doesn’t spare you from that and the heartbreak that both characters are feeling is very clear.

“But if my choice was having Anna one last time or never having her again, I’d take a few minutes in heaven with her and deal with the hell of it all later.”

Sean- Sean… He kept making mistake after mistake during this book and my heart hurt for him because he didn’t know what he was doing when he did it. He was trying to do the right thing or make the best out the situation and it always seemed to back fire. I couldn’t help but feel for him and his unwavering love toward Anna, despite all that they had gone through, made me love his character. I am so happy that he didn’t give up and kept on pushing.

“There are moments in life when everything changes. When the earth shifts, and the ground crumbles beneath your feet. Most of the time, you never see it coming. You certainly don’t invite it. But I had.”

Anna- Anna made a lot of mistakes too which is something she is never really called out on. That aggravated me a little bit because Sean had to pay for his mistakes and it felt like she didn’t. She came off as a saint and I was stuck going… uh hello? She kept his child from him for four years and he doesn’t even really yell at her. No matter what happened between them, that was wrong of her and she constantly threw his bad choices in his face, but her’s was never really acknowledged. It just didn’t sit well with me.

“Cataloging the tone and the pitch, I added it to the symphony of sounds seared into my brain. And I knew without a doubt that in a sea of voices, I’d always hear hers.”

Willow- My heart broke for Sean when I found out that he had missed out on four years of his daughters life, but it broke even more for Willow. She was just so sweet and perfect and precious. When her hearing problem came to light, I couldn’t stop crying. I felt so bad for this little girl and when the scenes happened where she swayed to the music, I sobbed. Sean hooking up the machine in his basement so Willow could see the colors was heart-wrenching for me and seeing this little girl get to play the drums brought an emotion out in me that I can’t even put into words.

“Asking me to love you is like asking me to breathe. I don’t have a choice, baby.”

Logan- Is it just me or was Logan being a grade A dick in this book?! That thing he pulled with Kimber was unacceptable and I wanted to punch him in the face.

“Anna didn’t put the music in my head, but without her, I couldn’t hear it. She was the muse.”

Kimber- I wish that Sean would have publicly shamed her or something. I know I wouldn’t have been able to keep my mouth shut if I was at an event with her.

“Holding onto anger was like drinking poison and hoping the other person would die.”

Overall, I really enjoyed this book. It ripped my heart out more than once, but it was totally worth it. I will be continuing the series and I can’t wait to read the next book!

DNF ~ Lost For You (Sixth Street Bands #4) by Jayne Frost