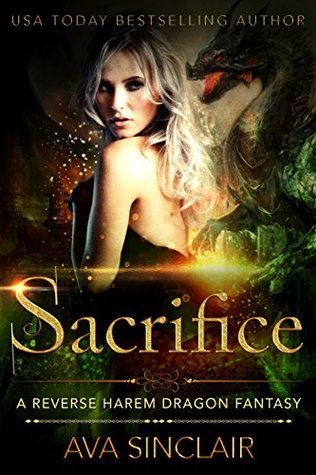 When my village sacrifices me to the dragons, I go willingly to the Altar Rock to die.

I wake up in a castle built into a huge mountain. House Fra’Hir is one of many castles in the Drakoryan Empire. It is here I learn the truth — that women like me aren’t taken away to be devoured, but to be mated.

My mates, four sons of a dragon knight slain in the last battle of the ShadowFell, are unique both in personality and carnal abilities. They introduce me to the world of pleasure. In their bed chambers, they prepare me with masterful skill for the final, ultimate bond that will make me truly theirs.

But I am no passive mate, and the secret they keep from me threatens not only our bond, but the role I am prophesied to play in stopping a lurking danger that threatens the Drakoryan and human world alike.

This book contains depictions of graphic sex and fantasy battlefield violence. Please do not purchase if these themes offend you.

SPOILERS THROUGHOUT:
I liked this book and enjoyed it a lot more than I thought I would. It has a pretty low rating on Goodreads and I thought that I wouldn’t enjoy it that much. I was a little leery to start reading it but I am ultimately glad I did. This book is proof that a Goodreads rating isn’t everything.

Lyla- I liked Lyla. She has a fire in her and it was entertaining to watch her. I loved when she stood up to her mates and it made smile when they were shocked by her audacity. Lyla was also very easy to connect with and her constant yearning for knowledge was a trait that I appreciated.

Drorgros- I liked Drorgros. He had that broody older brother with all of the responsibility on his shoulders vibe going for him. But he also had that compassionate caring side to him as well which showed with how he treated Lyla when they met.

Zelki- I didn’t know how to feel about Zelki at first. He came off as the jealous asshole that wanted to out do everyone else. I felt like he didn’t care about Lyla as a person and only cared about being the best sexually in her eyes. But, by the end of the book, I grew to care about his character and I realized that all of that anger and jealousy really comes from being the youngest and constantly feeling like he has to prove himself. That broke my heart and made me start to see his character for the good guy that he really is.

Tythos- Tythos was another character that I didn’t know how to feel about. At first, he came off like this player who didn’t want to settle down. He also didn’t think that a single woman could “handle him” which made me roll my eyes. I absolutely loved seeing Lyla put him in his place and make him realize just how wrong he was in thinking that.

Imryth- Imryth is that smart golden boy type that you wish all men were like. He is poetic and made my heart hurt with his sweetness.

Overall, I really enjoyed this book. The world it is set in is certainly interesting and unique. I am highly interested in continuing the series and reading about some of the other Drakoryan brides.