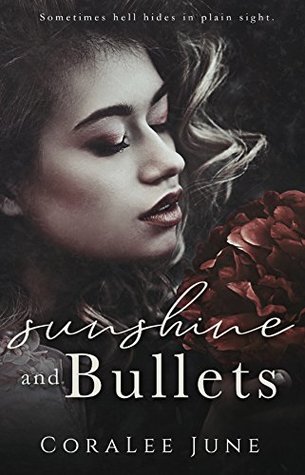 ∴  Sunshine and Bullets (The Bullets #1) by Coralee June ∴

It’s a nickname I haven’t heard since I lived on Woodbury Lane, where the houses were pretty but the secrets? Deadly. It was a pet name known only to the Bullets. Rough, violent, and ruthless, they laid claim to the town — and my heart.

I wasn’t supposed to fall for a boy from the wrong side of the tracks—especially not four of them. But they were the only ones who understood that sometimes hell hides in plain sight.

I was the girl with all the conveniences a privileged upbringing could provide. The world only saw two loving parents and a pristine home life, but I knew the truth. And it was going to get me killed. So, I disappeared, from everyone and everything I’d ever known. I changed my name and my appearance, but the scars I carry, they’re still the same.

The Bullets are all grown up now, too — a crime boss, a pro fighter, a bounty hunter, and a federal agent. Life took them in different directions, but they once shared the bonds of a brotherhood forged under the harshest conditions. Together they were fearless. Brutal. Unstoppable.

I’m praying they can find that unity again. If I’m going to survive this, it’ll take everything they have. Because that’s the thing about running from the past.

Eventually, it catches up to you.

“Being friends with the Bullets was like a drug, and I was an addict. One taste was never enough.”

Wow… I can honestly say that I was not expecting that. I was not expecting to love this book as much as I did or enjoy it even a tenth of how much I did. I was constantly on the edge of my seat, my heart was being torn in all different kinds of directions, and I did not want to put this book down. It had me hooked from the very beginning and I couldn’t have let go even if I wanted to. This book truly is a masterpiece.

“At the core of my personality was just a broken girl that loved too deeply.”

Summer/Sunshine- I fell in love with Summer’s past self and her present one. She is written beautifully and I deeply admire her. She has a hidden strength in her that a lot of people don’t and her story is one that I will never forget. It touched me deeply and her character really struck a cord in me. I can’t imagine going through what she did and the fact that she survived it all is truly a miracle.

“Gavriel wanted to control me. Blaise wanted to see me. Callum wanted to save me. Ryker wanted to punish me.”

Gavriel- Gavriel is one of those characters that calls to me in a way that he shouldn’t. He’s not the hero and certainly not the good guy. In a different book he could easily be the villain of the story. He’s hard, demanding, controlling, and sometimes he is just downright cruel. But… I get him. He’s not perfect and he’s never gonna be. He doesn’t disillusion anyone by trying to be something he’s not. Gavriel’s realistic and that part of his personality speaks to me more than anything else.

“You have to fight evil with evil. The road to justice isn’t lateral. Sometimes, it’s messy.”

Blaise- Blaise is the wanna be playboy/sarcastic guy that found the one and doesn’t know what to do about it. He does what he can to make her notice him, but what he truly doesn’t get is that she already did. Blaise is insecure and raw and I just want to hold him and make it all better.

“He saw the world like none other, but he couldn’t see himself.”

Ryker- It took a little while for the true Ryker to come through, but when he finally did, I loved him more than I thought I could. He is broken and damaged and insecure and lonely and scared. All he wants is for people to just stop leaving him and it broke my heart. He is this gruff fighter on the outside, but on the inside, he feels things deeper than all of the others do. His character is flawed and broken and I want to do anything I can to make it all better.

Callum- Out of the guys, Callum is the one I least connected with. That is not to say that I didn’t still love him, he just wasn’t as focused on in my opinion. He is taking his time coming around to the situation and I didn’t realize how he fit with the rest of the group until the end. He is just as broken as the rest of the guys are, he just hides it better than they do. Callum wants security and a family and, at the end of the day, isn’t that we all want? To be loved and to know that the ones we love will always be there? I get that. And that is why I fell for Callum as a character.

“It’s only when you’ve lost everything that you start to treasure the things you find.”

Nix- I LOVE NIX. He is one of my favorite characters (even though he was only in like 5% of this book. I loved everything about him and he always said what I was thinking inside my head. I need him in the next book. Badly.

“The road to hell and back was littered with casualties.”

Mr. Bright- I knew he was villainous and depraved, but I didn’t realize how much until the end of this book. Those couple pages in his “lair” made me absolutely sick and I am dreading his eventual return. As a villain, he is soundly scary and gives me the creeps.

“But love wasn’t enough when you were up against the devil.”

What I Liked Loved- I loved everything about this book. From the character drama, to the villain, to the past-present layout of the book, to the plot of the book itself. I’m going to say now, I am NOT a plot person. I am a character person through and through. It takes a lot to make me care about a plot and that is what this book did.

“I’ve always been content to be their lowkey secret. I’d rather know their hearts than see what everyone else saw.”

What I Didn’t Like- Nothing. This book was absolute perfection.

“The world broke us, and the only way we’ll ever feel whole again is with each other.”

Obviously, I highly enjoyed this book and will be continuing the series. I love these characters and I deeply care about what happens to them. I equally can’t wait and dread reading the next book. I want my babies to remain safe and in a happy bubble, even though I know that that isn’t going to happen. This is labeled dark for a reason. Unhappiness and tragedy come with the territory.