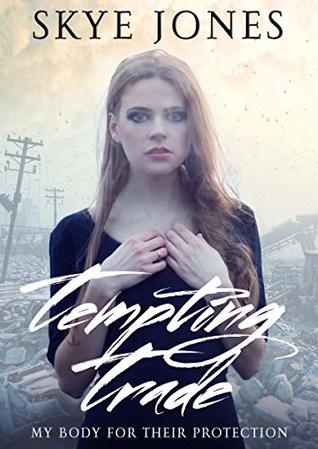 In a world gone to hell,
I was taken, threatened,
Destroyed.

Or so I thought…

It was a tempting trade,
A deal made with danger.

They would protect me,
Keep me safe,
Be my sanctuary.

But I would give them my body,
Give up my inhibitions,
Give them everything.
Four men–and they all wanted me.

But everything has a catch,
And this was no exception.

It was a tempting trade, my body for their protection.

“You’re our very own Helen of Troy.”

SPOILERS THROUGHOUT:
I really liked this book. It was fast paced, the characters were great, and the world was unique. The plot had some twists and turns that surprised me at times as well.

Milly- I liked Milly. She was a kind soul with a brave heart. I loved her temper and how she stood up for herself. She wasn’t just going to let things happen to her and just watch. I’m really hoping that Milly takes her temper and breaks free of her mother’s hold in the next book.

Jackson- I love me a dark and brooding bad boy. Especially one that has been genetically enhanced with animal DNA. As soon as I saw him through Milly’s eyes, I was like “Yep, he’ll do”.

Doc & Ben- I need to see some more of them. Right now, their personalities are kind of blending together and neither one is standing out to me. I do like the werewolf spin on Ben’s character though.

Alex- Let me just say that I am not the biggest fan of vampires. In fact, they are probably at the bottom of my list as far as supernatural creatures goes. With that being said, I loved Alex! He was interesting and mysterious and I. JUST. WANT. MORE.

What I Liked- Definitely the characters which I pretty much loved them all. I also liked the world and I am interested in seeing more of it.

What I Didn’t Like- Info-dumping. This book had an unbelievable amount of info-dumping. At times, it would go on for four or five pages which was annoying as hell. Also, there were a few times where the author would repeat information that we were told already. This isn’t a large book so I don’t see how anyone could forget basic things so I didn’t see why the author felt the need to repeat some basic information over and over.

Overall, I really enjoyed this book. I am probably going to continue the series with the next book, Dangerous Deal which I am pretty excited to start.