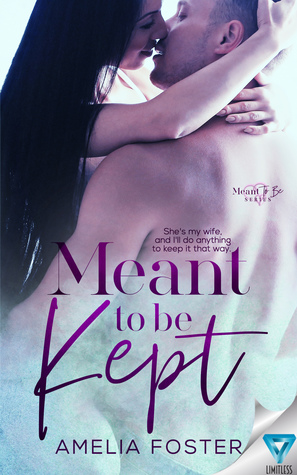 ∴ Meant to be Kept by Amelia Foster ∴

One night. One too many drinks. One mistake. That’s all it took to derail my marriage.

Now, all I can do is beg for a second chance. To try and redeem myself in a bid not to lose the love of my life.

I’m determined to use every second, every moment I have to show my wife how much she means to me—to rebuild the trust I shattered.

But the harder I try, the more I start to realize our marriage had fallen into a routine of complacency and misplaced priorities long before my indiscretion.

Isabelle is a strong, passionate, beautiful woman—a wife who has sacrificed so much for me. I just hope it’s not too late for us, and that I’ll be able to convince her that our love is meant to be kept.

*I received an eARC of this book from the author in exchange for an honest review.*

MINOR SPOILERS THROUGHOUT:
This book had a concept that fascinated me because when you traditionally read a book, a character that cheats is public enemy number one. Think about all the times when you have read a book where the main female character’s husband would be a cheating dog, would leave him, and how you would cheer her on. You would probably say something like “you go girl!”. Well… what do you do when the cheater is the main male character that is beyond sorry and wants her back? Do you still cheer when she leaves him? Do you accept his apology and pray that they work things out? Well that’s where this book starts off.

“Good enough? He rolled her beneath him and held her chin firmly with one hand. “I’ve never, and I mean never, known anything in this world that could compare to you, Belle. I meant what I said, sweetheart. I want you with me every day for the rest of my life. Hell no, you’re not good enough; you’re too damn good for me. But since I’m one lucky guy, I get to keep you anyway. Forever.”

Tanner- I didn’t know how to feel about Tanner. On one hand, I could clearly see the pain he had caused his wife by his cheating and I wanted her to hold her ground and leave. But on the other, I saw how broken Tanner was and how much he hated himself over what he had done. I decided to watch him for a while and wait to form my opinion of him completely. Turns out, that was the right thing to do because I loved him! He owned up to what he did, didn’t make excuses for his actions, and tried SO hard to make things right. He made a mistake and I can honestly say without a shadow of a doubt that he did everything he could do to make it right and that he won’t make that mistake again.

“He was Tanner Carlisle; he took care of the people he loved. And he loved her beyond all sense and reason.”

Belle- I must say, I didn’t really see any progression of her character which is one of the main problems I had with the book. Belle was the same person at the beginning that she was at the end, at least in my mind. I liked that she was strong and stuck to her guns though.

“You don’t get to walk into my life and make me the happiest man in the world for more than a decade and then throw it away because I screwed up one time. No, Belle. It isn’t going down like that.”

What I Liked- I liked the central message behind the story. That everyone screws up and deserves a second chance. To let someone prove their worth to you before you completely cut them out of your life over a stupid mistake.

“I know I don’t deserve it, sweetheart,” he repeated, “but I will never again take for granted one second with you if you can possibly find a way to forgive me.”

What I Didn’t Like- My main problem with this book was the pacing. Even though the scenes from the past helped with character development, they slowed down the story immensely. It took forever for the plot to go anywhere and I almost DNF’d the book multiple times. After a while, the past scenes stopped helping development and just became plain boring and useless. It felt like I was reading the same chapters in the past as the ones in the future. Belle and Tanner would fight about the same things and kept going around in circles. For a while it felt like the plot wasn’t moving which annoyed the hell out of me. I felt like a lot of this book could have been cut out which would have sped the pacing up and kept my interest longer.

“Some secrets are meant to be kept.”

Overall, I enjoyed this book. I would consider reading more books by the author in the future if she ever wrote anything that sounded interesting to me.