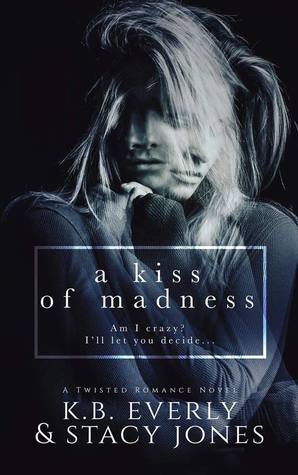 Madness – A word defined as the state of insanity. Chaotic frenzy. Crazy.

It doesn’t matter how you define it. It only matters how you perceive it.

I’ve always known things I shouldn’t know. Seen things I shouldn’t see, things no one else sees. But one terrifying vision—and my reaction to it—lands me in Brocker’s Center for the Criminally Insane.
I’m convinced I can make it through my time here unscathed. After all, I’m not crazy. But after spending time with three guys—a schizophrenic with two personalities, a pathological liar who isn’t to be trusted, and a nymphomaniac with a penchant for knives—I’m beginning to doubt my sanity.

Can I separate the real from the mad, or will this place make me spiral further down into the dark recesses of my mind?

Am I crazy?
I’ll let you decide…

*This is a twisted romance novel that’ll leave you questioning if what you’re reading is true, or just a Kiss Of Madness*

**WARNING: This book contains themes and situations some readers may find sensitive including mental illness, assault, and attempted sexual assault.

“I was ready to start living. And all it had taken was nearly dying.”

I wanted to love this book. It had glowing reviews and as soon as I read the synopsis, I was ecstatic and dying to start reading it. It sounded right up my alley and I wanted something dark that would have me on the edge of my seat. Unfortunately, this book just didn’t do that for me.

Lydia- While she was an interesting character with an interesting ability, being in her head was disorienting and confusing. I don’t know if the authors meant it this way, but she came off very nonsensical and her thought process led her to do some things that I really don’t agree with. I felt like she made some stupid decisions that almost got her killed.

Pierce- I liked Pierce, but I felt like his nymphomania wasn’t shown enough. Neither was his “penchant for knives”. The only ever time him and a knife is brought up is when Lydia sees his tattoo and when they break into Dr. Ferrer’s office. I wouldn’t exactly call that a penchant for knives. I felt like the synopsis painted him in a light that he certainly was not supposed to be in. He came off as a wanna-be play boy. I did really enjoy his protective side when it came out though.

Mason/Jason- I felt like these two were the most shown. I could clearly tell which was which and their development was more thought out than the other two guys. However, I still felt like I didn’t get to see enough of them. The scenes with Mason/Jason felt a little rushed and I feel like there weren’t enough of them.

Emmett- I feel like Emmett was the least developed of the guys. He was supposed to be a pathological liar, but he never talked enough to tell any lies. The only time when his lying is even a factor is the first time he talks to Lydia, which she just shrugs off.

What I Liked- I liked the part of the epilogue where we find out that Pierce is a cook, Emmett is a method actor, and Mason and Jason are twins. I thought that that aspect of the story was interesting and well thought out. It was a pleasant surprise.

What I Didn’t Like- I knew right away that the guys were a figment of Lydia’s imagination. I believe that this obscured my views of them, because I knew they weren’t real and I didn’t want to connect with them when I knew Lydia would eventually lose them. Also, because I knew this, the “plot twist” at the end was lackluster and I spent the whole book just waiting for it to come out. It didn’t shock me at all and actually confused me more than I already was. That epilogue was just awkward and didn’t make a lot of sense either. I’m still not sure if the guys recognized Lydia at the end or if they didn’t.