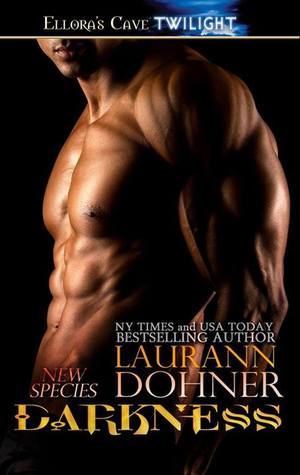 Kat’s boss wants dirt on the NSO. She is sent to Homeland undercover but everything goes wrong as soon as she enters the front gates. She is arrested by a big, powerful, sexy New Species but she is not frightened. He turns her on and things heat up fast between them. Now, she just hopes he does not break her heart.

Darkness admires Kat’s courage but he cannot trust anything she says. He hasn’t been with a female for years because he knows he is too damaged. He is not mate material, despite his desire to possess her in every way. Darkness fears losing control—the one thing that defines his life. He doesn’t think he can tear down the protective walls he’s built, even for her.

Inside Scoop: Kat never realized how much fun handcuffs and dominant males could be until she discovered her kinky side through Darkness’ need for control.

MINOR SPOILERS THROUGHOUT:
I really liked this book. It was fast paced and constantly had my attention. The plot didn’t drag at all and I really enjoyed how it flowed easily. This series is so great and each book just makes me love it more and more. Each time I read a new installment, I get to see so many of my babies from past books and it just warms my heart!

Darkness was so great. I knew going in that he had gone through a lot in his life and that he would be a little damaged. That is the understatement of the century. What I had known from previous books was just the tip of the very giant iceberg. I felt so bad for him. The things he has gone through in his life are horrible and I know for a fact that I wouldn’t have been able to withstand it physically or emotionally. There were many times that him saying something about his past made me cry. Because of all of the stuff he’s had to go through, he had so many walls and I was really happy that he found Kat who helped break them down. He deserved happiness in his life after everything he’d been through.

I loved Kat. She was such a strong female character. She didn’t need a man and was a badass. While she was tough, she did have a lot of emotion to her character which I appreciated. I felt like she was exactly what Darkness needed. She wasn’t going to just lay down and take it when he was being rude. She argued back and wouldn’t stand down just because he got angry. I really liked that about her character.

Honorable Mentions: Salvation and Forest… I loved getting to see them in this book. We’ve gotten little glimpses but never as many scenes as we did here. Salvation is 3 years old! I almost died when I found that out. He was so cute and reminded me of Fury so much. I actually teared up a little when he interacted with his mom and dad. I really enjoyed getting to see them and I hope to see more of them in the future.

Obviously, I still love this series and will be reading the next book.