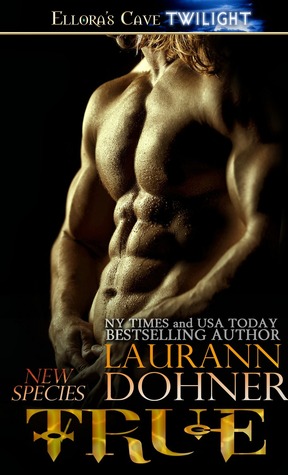 Jeanie loves a New Species and is willing to pay for that love with pain, tears and heartbreak. She’ll do anything to keep 710 alive but she never wants him to know how she suffered for him. He’s the reason for her mission in life—freeing others like him.

True has a new life working with the NSO to rescue his people. A good life, until he encounters a dying woman—the female who betrayed him. True should feel gratified that she’s finally going to pay for her crimes, but she claims to be a victim too. He is still irresistibly drawn to the pretty little human who touched his heart and made him want her. When he clasps her hand to offer comfort, his instincts kick in and True will fight everyone to protect her.

JANUARY 14, 2019 REVIEW (4.25 STARS)-
This book started out great. I didn’t remember much from my previous read so I basically went into this book blind. I became hooked quickly and I could not put it down for the life of me. I connected quickly to True and Jeanie’s story and even shed a few tears after learning what they had both endured. They made my heart hurt and I felt so much frustration towards the situations they had both found themselves in.

DECEMBER 20, 2017 REVIEW (5 STARS)-
SPOILERS THROUGHOUT:
I loved this book. It was fast paced and constantly had my attention. I never knew what was going to happen next and I really liked the mystery aspect of the story. Every book in this series draws me in more and makes me more connected. I love these characters and I always love to see my babies from past books.

True was great. He was caring and compassionate towards Jeanie. He always tried to put her needs first and he really tried to be the best person he could be for her. I loved how possessive he was of her even when he didn’t really know why yet. I also liked how he believed her and stood up for her against Justice and anyone else who tried to take her away.

Jeanie was absolutely amazing. She had such a big heart and would do anything to help a New Species. She endured countless hours of torture for True and that really showed what kind of person she was. She went into the line of fire many times for New Species and it surprised me how many lives she touched with her kindness. She brought them cookies on Christmas (even though they didn’t know what it was) for crying out loud. If that doesn’t show how sweet and caring she is, I don’t know what would.

Honorable Mentions: Darkness… I loved him. He was so dark (ha ha ha) and mysterious. I know his book is next and I honestly can’t wait. From the role he played in this book, I know that his book is going to be just as good, if not better, than the other books in the series. I am so ready for his book I can’t wait!