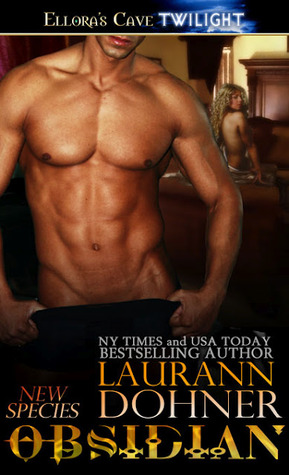 Book 8 in the New Species series. Dr. Allison Baker is obsessed with saving the comatose New Species male. She has tried everything and there’s only one option left. Alli will break every rule and put her life in danger by tempting 880 to wake, using only her feminine scent and touch. She just has to kidnap him and crawl into bed with him to make it work. 880 wakes in a different world with a small female who’s been sleeping beside him, caressing him and wrapping her sweet body around his, teasing his senses. He lies silent and still, listening and evaluating each arousing touch, fighting his body’s reaction. Hatred flares when he discovers she’s human, but Mercile stole everything from him so he decides it’s fair to take her in return. But things quickly change and he wants her at his side and in his bed. 880 has chosen a new name-Obsidian-the personification of dark and dangerous. He’ll fight them all to keep Alli. No one will stand in his way.

JANUARY 10, 2019 REVIEW (5 STARS)-
I loved this book. I remembered enjoying it the first time I read it, but I couldn’t have imagined how much I would enjoy it the second time. I stayed up very late last night because I couldn’t put this book down. I knew what was gonna happen because I already read it, but it made no difference. I was hooked and I had to force myself to go to sleep.

Obsidian- I forgot how much I loved him. He is a little more dominant and possessive than the other leading males, but it didn’t bother me at all. In fact, I understood why he acted the way he did and knowing the motivation behind his actions really endeared him to me. He broke my heart when he talked about his past and any time he opened up to Allison, my heart melted.

Allison- I loved her as well. She truly cares about her patients and the measures she went to in this book to keep Obsidian alive was astounding. In my opinion, she cared about his well being more than his own people did. That speaks volumes about her character and her heart. It infuriated me when they tried to punish her, because in my mind, she did nothing wrong. If every doctor went to such extremes to keep their patients alive, there would be more people alive on this planet right now. I admire Alli’s dedication and I truly believe that she is a beautiful person, inside and out.

I am still highly enjoying my reread of this series. I can’t wait to dive into the next installment, Shadow. If I remember correctly, the next book is one of my favorites as well.

DECEMBER 18, 2017 REVIEW (5 STARS)-
SPOILERS THROUGHOUT:
I loved this book. It was a little different from the previous New Species books but I really liked it. There were a few times where I was frustrated but that was mainly with conflicts between characters. The pacing was great and didn’t drag. The first chapter immediately hooked me into the book.

I loved Obsidian. There were a few times that I was frustrated with him but I had to give him the benefit of the doubt because he didn’t know any better. I really felt bad for him going into the book and I just gradually felt more and more sympathetic towards him as the book went on. His “mate” that died was cruel and distant towards him so he never really knew a female’s touch. He had never even kissed anyone before Alli. There were times that he was bossy and intolerable but I can’t be mad at him after what he went through. He grew on me as the book went on and he gradually became one of my favorite males in this series.

Allison was great. I loved her. So much so, that she is my favorite leading female in this series to date. She took major risks in the beginning of the book to help Obsidian. I have never seen a woman so dedicated to her job and saving her patient’s life. It took a lot of guts to do what she did and I truly admire her for her bravery. She would truly do anything to save a life and that really showed throughout the book. She was truly a great person and I really hope to see more of her in the future. I am curious where her and Obsidian’s story will go now.

I just wanted to add that I HATE Dr. Kregkor. I am telling you right now that I got a major red flag when it came to him during this novel. I hated what he did to Allison but besides that, there is something about him that isn’t right. I will not be surprised if he betrays the New Species in a future installment. He was just too aggressive towards Allison and some of the things he said to her were just downright despicable. Something isn’t right with him and I want to know what it is.

This was a great addition to the series. Usually by now, a series starts to wane and the quality just stops being as good as previous books. That is not the case with this series. Each book is great and draws me in every time. Obviously, I will be reading the next installment and can’t wait for it.