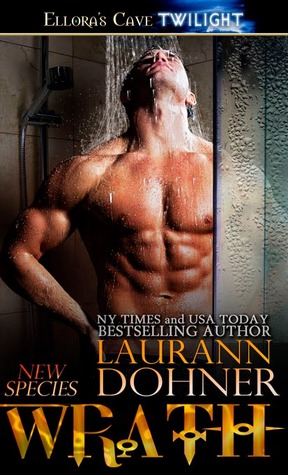 Wrath volunteers to live and work outside Homeland, where he’ll once again be confined in a small space with other males. He was subjected to horrific abuse and conditioning and forced to view endless sex tapes of human females while chained to Mercile’s perverted machines. Wrath knows he’s too dangerous and emotionally damaged to ever be with a female.

Lauren has just been detained by three big, buff, well-armed men-New Species. One of them really catches her eye. He’s tall, sexy and . . . her new roommate, apparently. Having never met a man this spectacular, she decides to taste every inch of his amazing body. Wrath is definitely open to that plan. The sex is incredible and he gives her everything she needs-but he’ll only go so far. Something is holding him back.

Lauren has to make him unleash his desire and Wrath has to get past his fear if the couple wants any chance at a future together.

Publisher’s Note: While each New Species book is a standalone, the greatest enjoyment will come from reading them in series order.

MINOR SPOILERS THROUGHOUT:
Laurann Dohner got her mojo back for this book! I loved every second of it! I said in my review of the last book that I felt like it missed the mark but I felt the opposite for this book. It was so good. The plot was fast paced and didn’t drag at all. This book definitely brought back all of my love for this series and I am glad I read it.

Wrath was great. He was introduced in the last book and I didn’t realize who he was until after I started it. Meeting him before this book made me know a little more about him and I was excited once I realized he was 919 from the last book. I felt so bad for him and everything he had gone through. I don’t know everything that has happened to all of the New Species but I do feel that from what I have heard, Wrath had it worse than most. I understand his aversion to humans and I was really proud of him getting over his fear of hurting Lauren. He is definitely one of my favorite male leads so far.

Lauren was great too. She was a real-estate agent who got brought into something she wanted no part in. Luckily, she met Wrath. She went through a lot throughout this book and I felt like she was really brave considering the circumstances. She was overweight (according to her) and at times she was really insecure about it. I was glad that she found Wrath and could learn to be comfortable with her body.

Obviously, I really enjoyed this book and will be continuing the series.