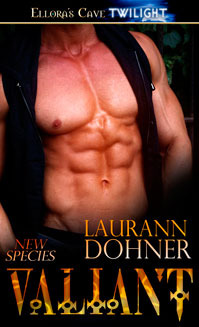 Tammy has always tried to be prepared for any calamity life might send her way, but a sexy, lion man-beast is way outside the norm. He’s huge, has the most exotic, golden cat-eyes she’s ever seen—and she’s so terrified of him, she’s speechless for the first time in her life. He’s stalking closer, growling at her, and she’s too unnerved to even flee.

Valiant has always hated humans. But when he gets a whiff of the adorable human female who has invaded his territory, he’s forced to reexamine his feelings on the matter. Her fear scents of pure, sweet temptation and the closer he gets, the more appealing she becomes. Once he’s got his hands on her, he isn’t about to let go. One thought will change his life. MINE!

Before Tammy can regain her senses, she’s flat on her back in Valiant’s bed. Now he just has to use every inch of his big, buff body to convince her to stay with him forever.

January 8, 2019 REVIEW (5 STARS)-
I loved my reread of this book! It was even better than I remembered! I was fan-girling so hard while reading it and I was reminded why I love this series so much.

Valiant- I love Valiant more than words can say. He is just so precious and he makes my heart hurt so much. Whenever he talked about his past and how lonely he was, I just wanted to jump into the book and give him a hug. I am so happy that he found Tammy and gets to spend his life with her.

Tammy- I really like Tammy as well. I love her fire and I highly enjoy when she stands up to Valiant when he is being unreasonable. The mental image I have of her five foot self standing up to his six and a half foot self just makes me giddy with excitement.

My favorite part of this book will forever be the first chapter. It gripped my attention from the moment I read it and I burst out laughing a couple of times. That chapter alone made me fall in love with this book and everything after that just reaffirmed my love for it.

I can’t wait to continue my reread of this series.

DECEMBER 13, 2017 REVIEW (5 STARS)-
I loved this book. It is my favorite in the series so far. It was fast paced and constantly had my attention. I honestly felt like I read it for what felt like an hour and then it was over. I have mentioned before that I love the concept of the New Species and I always enjoy the books. I was really excited going in when I found out it would be Valiant’s book. I had met him before and I was really intrigued by the brief glimpse I saw of his character.

Valiant was amazing! His DNA is more animal than human so he looks and acts more animal like than any of the previous males. He was also the first feline male so far. Valiant is six foot six and two-hundred and sixty pounds. If that isn’t HUGE, I don’t know what is. I was really surprised by his character. Even though he comes off rough and intimidating, he is truly a sweet heart. If I didn’t know any better, I would think he was more a lion cub than a full grown lion. He loves Tammy so much and he goes after what he wants. He didn’t let her resistance get in the way of the bond he felt between them and didn’t give up no matter what.

Tammy was great. She stood up to Valiant when it counted and wasn’t afraid to put her foot down. There were times when I would say she was a little slow in the intelligence department. Like how she didn’t guess that Slade was the father of Trisha’s baby even though it was obvious. Overall, she was really caring and compassionate which is really all that I ask for in the leading female character.

Honorable Mention: I loved that first chapter. It was SO good. I almost fell off my bed I was laughing so hard. I think Laurann Dohner really has a gift for opening chapters that just hook you immediately. I also found Tiger to be really funny during that part. I know he is the leading male in one of the future books and I am excited about it.

Another honorable mention would be 927. I adored him. He was like Valiant in the fact that he was giant and intimidating on the outside, but a cute little teddy bear on the inside. I believe he ends up picking the name Hero which I absolutely love and I think fits him really well. Breeze mentioned at the end that she was attracted to him so I am curious where that will go. I can’t wait to read his story and find out more about him.

Obviously, I love this series and will be reading the next installment.