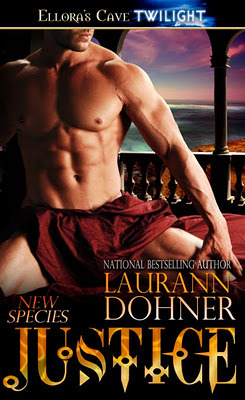 Justice North is the face of New Species. Seeing him up close makes Jessie’s heart race. He’s the ultimate alpha male-big, muscular, exotically beautiful…and dangerous. Of course he’s off limits. But then the sexy man purrs and all bets are off.

Jessie Dupree is a mouthy, fiery human female who brings out the animal in Justice. She wants to show him how to relax, and he’s all for anything she wants to do, but Justice has sworn to protect his people and to take a Species mate. He’s torn between the woman he wants and the oath he’s taken.

Jessie knows a relationship between them probably won’t end well; heartbreak is inevitable. But that won’t stop her from freeing the wildness inside Justice and spending every moment she can steal wrapped around his hot body, making him roar with passion.

Reader Advisory: Each New Species book may be read as a standalone, but we suggest reading them in order to get the most enjoyment from the series.

I loved this book. It was fast paced and constantly had my attention. I never wanted to put it down. This series is so great and each book makes me love it more and more. I always fall in love with the characters and never really know what to expect.

Justice was great. He has so much responsibility that he can never really relax. He is the face of his people so he always has to be working. There were many times during the book that he put his people first and sacrificed his own happiness. I truly felt bad for him. Besides being a workaholic, Justice was great. He is compassionate and understanding and will fight for what he believes in.

Jessie was great. She was so strong and she never took no for an answer. She didn’t let the fact that she was human weigh her down. In fact, in the opening scene, she gets into a fight with a New Species male. I do feel like she was exactly what Justice needed in his life and I am happy they found each other. They both deserve some happiness.

Honorable Mention: Breeze. I loved her during this book! She is the sole reason that Justice and Jessie ended up together. That plan she had for the party was brilliant and I seriously wanted to clap for her. I hope to see more of her in the future. Obviously, I still love this series and will be reading the next book.