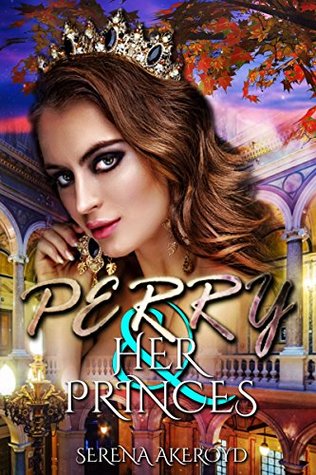 ∴ Perry and Her Princes (Kingdom of Veronia #1) by Serena Akeroyd ∴

Perry’s lineage constitutes an only God knows how many times ‘great’ grandfather who settled in Tennessee after the potato famine in Ireland, and a great grandmother who escaped the Nazis before the war.
She’s farmer stock. And has the hips to prove it.
Still, lineage doesn’t mean much when it comes to friends. Especially college friends. So, when a Prince of Veronia comes to Boston, attends her college, and just happens to make her acquaintance, who’s she to judge when a friendship is born?
And who’s to question why, when years later, they’re more like family than anything else?
Even if that’s way more platonic than she’d like.
She’d hump George DeSauvier six ways ’til Sunday if he’d let her, but, as far as she can tell, he only sees her as a ‘chum’.
Little does she know.
George DeSauvier is the second in line to the throne of Veronia, a tiny country, nestled between Italy, France, and Austria. Being a royal means nothing to him, not with the price it comes at, but to his brother? The heir? It’s everything.
Back in the day, Edward DeSauvier had been a wild child, and together, they’d discovered they had a penchant for sharing the women they bedded.
All these years later, George has decided it’s time to start up that little habit of theirs again.
With Perry in the middle.
Trouble is, Perry doesn’t even know George wants her. Never mind his brother.
And when a cousin of theirs, Xavier, accidentally gets thrown into the mix, Perry’s suddenly up to her eyeballs in DeSauvier royals.
It’s a hard life for some being surrounded by regal hunks, that is, of course, until the doodah hits the fan, and anti-Royal sentiment reaches a peak in Veronia once more.
Will fear of loss make Perry take the next step into a very complicated future? Or, will the sheer need she feels for three very different men be all that’s required…?
Find out in PERRY AND HER PRINCES.

MINOR SPOILERS THROUGHOUT:
I liked this book. It had an interesting concept and it was a little different from the stuff I usually read. I don’t traditionally read books with royalty unless it is fantasy, and even then, I don’t really see much of the inner workings of a court. The war aspect of the story tends to be more prominent than the politics of court. This book was a refreshing surprise in that way.

Perry- I liked her. She was a little different from the main female characters that I usually read. She was a scientist and she was really into conserving water and protecting the Earth. I don’t know much about that topic and at times, it made her point of view interesting; at other times, it made it very boring. Otherwise, she was a solid lead that made good decisions.

George- I liked him, probably the most out of the guys. He was funny and I appreciated his friendship with Perry. I also liked the fact that George knew who he was and what he wanted, and that he went after it.

Edward- I wanted to like Edward, but I found him really dull. His point of views weren’t particularly exciting and throughout the book, his main purpose was to oppose the plan that George had come out with. Nothing else.

Xavier- I thought that Xavier was interesting and I liked the way he met Perry. I also liked the fact that he was similar to her and that they could talk about stuff that would make other people bored. Unfortunately, I had the same problem with him that I had with Perry. They would get to talking and my mind would wander because I didn’t care about their scientist lingo.

What I Liked- I liked the court setting and the way the reverse harem relationship was developed.

What I Didn’t Liked- Besides the stuff I listed above, I did not like the “mystery” aspect concerning Edward’s deceased wife or the Unreals rebel force aspect that I know will play a role in the future books. I just didn’t care about that at all. After a while, I even started to stop caring about the reverse harem aspect of the story. I knew then that this series wasn’t for me.

Overall, this was a decent book and I enjoyed it. I will not be continuing the series though, as you probably have already guessed.