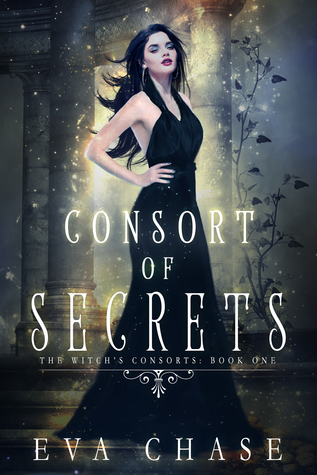 Every witch knows the rules: Stick to your own kind. Never reveal your powers to outsiders. Take a consort from the witching families or kiss your magic good-bye forever.

For years I’ve been quiet, obedient Rose Hallowell. I accepted the man my stepmother chose for me. But I never stopped missing my long-ago friends.

Now we’re back on my childhood estate to arrange my marriage. The boys I grew up with? They’re still in town—and they haven’t forgotten me either. And damn if they haven’t grown up well.

They’ve got no magic, no place in my life. But they’re charming and sweet and infuriatingly hot, and I can’t seem to stay away. The more I try to resist, the more secrets I uncover about my family, my betrothal, and everything I thought was true about the witching world.

I’ve been lied to. I’ve been betrayed. So to claim my magic and my happiness, I’ll break every rule there is—and then some.

Don’t mess with this witch. Every rose has thorns.

*Consort of Secrets is the first full-length novel in a steamy reverse harem paranormal romance series. Take a dollop of gothic atmosphere, add a heaping of romantic angst, and mix it up with five enticing young men and a passionate witch just coming into her own.*

MAJOR SPOILERS THROUGHOUT:
I really liked this book. It was fast paced, constantly had my attention, and the time just flew by while I was reading it. The story line was interesting and I enjoyed the mystery aspect of the story.

Rose- I liked Rose. She was smart and I enjoyed watching her figure out this devious plot against her. She was badass in the mind instead of physically and she definitely used it to her advantage.

Philomena- I loved Phil. She told Rose exactly what I was thinking and her constant commentary was hilarious. I was shocked when I found out that she wasn’t real and only a figment of Rose’s imagination. At the same time, I thought that Phil’s character was a brilliant detail to add to the story. We all have that favorite character that is so vivid in our mind that we wished was our best friend and it made Rose’s character even more relatable to me.

Kyler- I liked Kyler. Even though I am typically drawn to the alpha-bad boy, there is just something about the All American Golden Boy that gets to me. Plus, hearing Ky talk about hacking computers just because he wanted to prove he could gave me life.

Seth- I liked Seth. I consider him the more serious, protective type male character which is always endearing to me. He is the opposite of his twin, Ky, who is so care free and I just want to him to be happy.

Jin- I would have liked to see more of Jin. He was the male character that we spent the least amount of time with, but what I did see of him, I liked.

Damon- Damon got on my nerves a few times during this book. I don’t know why he does the stuff he does or why he constantly feels the need to push Rose away, but it better be for a good reason. I was really angry when he just threw her out after taking her virginity.

Celestine- I felt like she played a good villain/evil step-mom role. I am happy with the way she was dealt with, but I don’t think her story line is over quite yet. I would not be surprised if she popped up in the future books.

Derek- I didn’t like him from the moment he was mentioned and that opinion was solidified when Rose caught him with Polly. Derek is a slime ball that does not deserve Rose and I am not looking forward to him being in the next book.

What I Didn’t Like- There were a few times when I felt like the plot was going too fast and a few times when things did not make sense to me. Like when Rose would tell her guys about her magic. I felt like their reactions to her telling them that weren’t genuine enough. They didn’t freak out, even a little bit, which I felt they should of.

Overall, I really enjoyed reading this book. I will be continuing the series with, Consort of Thorns. I can’t wait to start it. I am so excited that Gabriel showed up at the end of the book and I can’t wait to see what impact he will have on the next book!