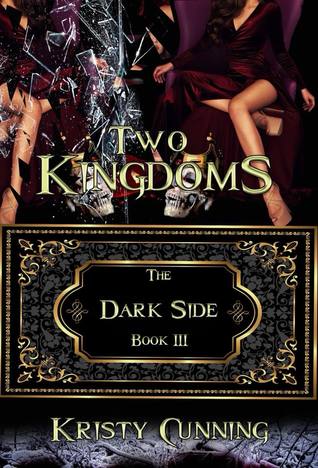 ∴ Two Kingdoms (The Dark Side #3) by Kristy Cunning ∴

I’m getting a little tired of completing my goals, only to have the bar raised too substantially for me to transition at a productive pace…
I started off as a sad little ghost with an impossible crush on four really hot, Gothic guys with some attitude problems. Now I’m The Apocalypse, they’re the Four Horsemen, and Lucifer is my fucked up daddy. Now my additional goals look like this?

Goal #9: Make a deal with the Devil without getting cheated, manipulated, or tricked.

Goal #10: Make my boys love me and take over the world…okay…so maybe just that first part. That second part sounds like it could take too much ambition, and I just don’t have the drive for that.

Goal #13: Find out if my siblings or my father killed me and my boys…

“Yes. It is selfless to love so fiercely you’d trade your own life for one—or all—of theirs,” he agrees. “There’s no doubt you’ll always put them before yourself. But it’s also selfish, because you love them too much to suffer through the agony of losing even one. You’d rather die.”

DNF 78%
MAJOR SPOILERS THROUGHOUT:
I knew going in that this book would not be as good as the first two, but dang… that was rough. The first 30% or so was good, but after that, this book steadily went downhill. It felt like the story was getting dragged out and nothing exciting was happening. I held on, hoping it would get better, but after a while, even Paca’s usually appealing personality wasn’t enough to make me want to hold on. I got sick and tired of Paca’s mistrust of her father and as soon as Jahl was mentioned and it started to look like he was going to be the “big bad”, I knew I was out. Out of all the options this author had to choose as the end all villain, she chose a mindless evil beast? Really?! I don’t find that appealing in any way.

Paca- I couldn’t care less about this saving the world plot line and I feel like it takes away from Paca’s character. Did we suddenly forget what Apocalypse means? The end of the world, right? So why are we all the sudden trying to have her save it? It makes no sense. Paca is supposed to be EVIL. She is literally the daughter of the devil. In my mind, it cheapened Paca’s character and made her less authentic because saving the world would be completely out of character for her.

Paca’s Harem- Usually, I go into a character-by-character analysis. But with this book, the boys played so little of a role that I don’t have anything to write about them individually. The plot completely drowned them out and they became annoying background noise after a while.

The Angels- I thought when they showed up that the plot was about to finally start getting interesting, but NOPE. They came off flat, annoying, and were just a flat out waste of my time reading about. The angels didn’t add any drama/tension to the plot and I wanted them to go away almost as soon as they appeared.

Lucifer- I used to be really interested in him and his plot line with Paca. In this book though, the back and forth between them just got annoying and I couldn’t deal with it any more.

Harold- I would just like to comment that I WAS RIGHT! I said that Harold couldn’t be trusted in my review of the first book. Just thought I’d put that out there.

Overall, this book just fell completely flat. I honestly don’t know what the author was thinking. This series had so much potential and I hate that this book went the way it did. I don’t like it when the author introduces the “villain” in the third book. It ruins the story in my mind. I think it’s just time I move on…