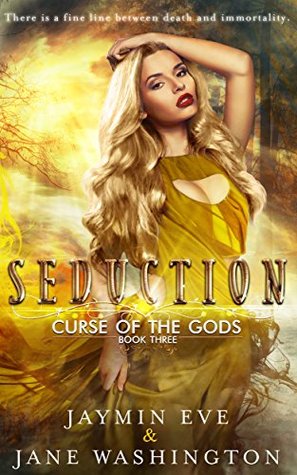 Willa has never been a particularly useful dweller: she isn’t very good at chores, she isn’t very good at worshipping, she isn’t very good at not having opinions, and she isn’t very good with rules—but none of that matters anymore.
The rules are changing.
The dwellers are trying to make their own way in the world, and Willa can’t seem to help getting tangled up in their plans.
Luckily, she has the Abcurse brothers to help her out—until she doesn’t, and suddenly she’s alone again in a world on the brink of chaos. With the Abcurses gone, she’ll have to rely on her wits, and her sister Emmy, to stay under the radar and survive.
Because someone wants her dead.

But, really, what else is new?

“I love you, too, Willa-toy. I don’t know what I’d do without you. Life—immortality—none of it meant anything until you tripped in and started setting things on fire.”

MAJOR SPOILERS THROUGHOUT:
I did not like Persuasion and I did not rate it very highly. In my review, I said that I am a very character driven person and that the characters kind of took a backseat to the plot. I had a really hard time getting through the last book and I debated for a while on if I would read this book or not. I consulted the girls over at Reverse Harem Revolution and they convinced me to begrudgingly continue.
I must say, this book had everything the last book lacked. All of the things I was upset about were resolved. Unfortunately, it was too little, too late. I made myself read this book and, by the time all of the scenes I wanted started happening, I couldn’t bring myself to care. I felt no emotion what-so-ever towards the scenes or the characters. I can see the good qualities in these characters, but I just don’t connect with them anymore. In fact, when Willa “died” I didn’t care in the slightest bit and I wasn’t concerned for her character in any way.
I believe that Persuasion ruined this series for me and I’m not going to force myself to read the next book. Maybe after a little time away, I will feel differently. One of the girls at Reverse Harem Revolution did say that the series is much better when you don’t binge read them. For now, I am just going to back away from this series.