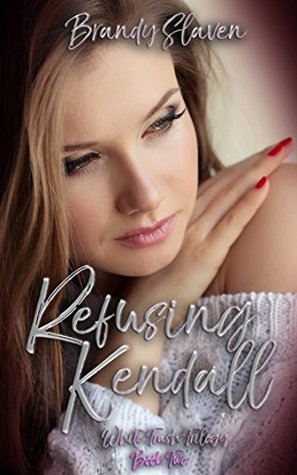 Kendall and her quad are moving on to the next chapter of their life. They now face the demanding schedules of going to separate colleges and the boys’ new football stardom.
When circumstances and doubt threaten the relationship the five of them have built, it will become Kendall’s responsibility to hold them together. But what happens when her past comes back to haunt her? Rejoin Kendall’s world in this next installment of the White Trash Trilogy.

“You know that one moment when you’re watching figure skaters on ice, and the male partner throws the girl into the air, and everyone holds their breath waiting for her to fall? That’s what kissing Goose is like. Living in that one moment of wonder, hoping that there will always be another.”

MAJOR SPOILERS THROUGHOUT:
I liked this book, just not as much as I would have liked to. The first half of this book was great and I was enjoying it just as much as the first one. The second half however, I did not really enjoy. You know that feeling when the couple breaks up in a book and you are just aching for them to get back together? That was what the entire second half of this book felt like. It took a lot of my enjoyment away from the story.

Kendall- While I love her as a character, she frustrated me a few times during this book. She jumped to conclusions on things and she made a bunch of what I would consider stupid decisions. She knew she had someone stalking her and yet, she didn’t stop to question if doors randomly shutting, lights turning off, or items being moved, meant that someone was in her house? She kept making references in her head to the stupid girl that always dies in a horror movie, yet she was acting like that more often than not during this book.

Teagan- I’m not gonna lie, I still am a little pissed with him after this book. I know he didn’t actually kiss that girl back, but letting her do so and not stopping her immediately is almost just as bad in my mind. Given, he made a lot of strides towards the end of the book to make up for it, but I still don’t think he should be forgiven right off the bat. There is no excuse for him letting that happen.

Lucas- I still absolutely love Lucas. He is just so precious and he tries his hardest to make Kendall happy. He was always there for Kendall during this book and I really think their relationship wouldn’t survive without him there to calm things down.

Goose- I am still a little mad at Goose as well. Though, I am not as mad at him as I was at Teagan. Goose went through some things during this book and I don’t believe that he will act that way again. In the part we got from his point of view, I saw how much guilt he felt and I couldn’t help but let that go a long ways to making me forgive him.

Maverick- I love Maverick, but I wish that he would have put his foot down when the giant argument happened between Goose, Teagan, and Kendall. He should have spoken up and I don’t see how he can be so vocal about his opinion sometimes, yet when it counted, he was silent. I am not mad at him though because after the part in his point of view, I see why he remained silent. That doesn’t mean I think it was the best thing however.

Derrik- When Derrik made his reappearance, I think I stopped breathing for a second. I was shocked that he showed up and I was certain that he was there to cause trouble. Instead, he apologized which surprised me. Honestly, I thought that his apology was subpar at best and it really meant nothing to me. I have personally been bullied (not to the extent that Kendall was) and I can honestly say that it leaves a mark on you and no amount of words can erase what that person did. Derrik’s character was not redeemed in my eyes in any way and I hope he doesn’t reappear again.

What I Liked- I liked that this series was continued and we got to see more of Kendall and her guys’ relationship. In reality, the story doesn’t stop when the book is over and it was nice to see what happened after the end of the last book. It made this book a lot more realistic and, even though I hated it, watching Kendall and her group struggle through everyday life was refreshing and it made me feel for these characters more.

What I Didn’t Like- My thoughts above should make what I disliked very clear. I had a lot of problems with this book and I just didn’t enjoy a large portion of it.

Side Note- When I got to the back of the book, I realized that another RH story was referenced in this book. I love when an author advertises other books in their genre and I am really proud of Brandy Slaven for doing that for two books in a row now.

Overall, I still really like this series. I will be reading the next book when it is released (hopefully soon). I hope I enjoy it more than I did this one though.