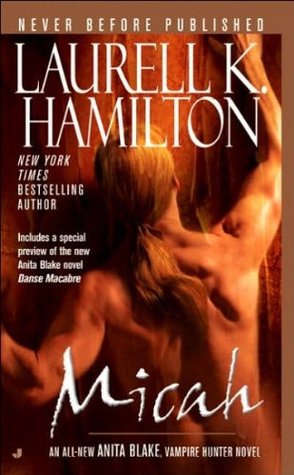 “RAISING THE DEAD IS EASY. LOVE IS HARD…”

There are lots of reasons to raise the dead-some private, some public. In this case, the feds have a witness who died before he could speak on the record. They want him raised so his testimony can be taken. So here I am, on a plane to Philadelphia, flying off to do my job.

But I’m not alone. Micah is with me. Micah, head of the St. Louis wereleopard pard. King to my Queen. The only one of my lovers who can stir my blood with just a glance from his chartreuse cat’s eyes. I was happy to have him at my side.

Until he mentioned that this will be our first time alone together. No Master Vampire. No Alpha Werewolf. Just me and Micah. And all my fears and doubts…

“And the moment you care that much, a man has you. He owns a little piece of your soul, and he can beat you to death with it.”

I really liked this installment in the Anita Blake series, though it felt more like a novella than a novel. It was short, sweet, and to the point. There was no extra scenes that were boring. Every scene was necessary in some way and each impacted the plot.
I liked getting to see Anita and Micah on their own because we haven’t really gotten that. Micah has been in the series for a while now and we really didn’t know anything about him until this installment. I liked getting to learn more about Micah and reading about his backstory. It made me connect to his character a lot more.
Overall, I really enjoyed this installment. I will admit that I was starting to get a little bored with this series and I was actually debating on continuing or not. The only reason I read this installment was because of how small it was. By the end of this book, I remembered why I like this series and it renewed my interest in it. That being said, I will be reading the next installment, Danse Macabre.