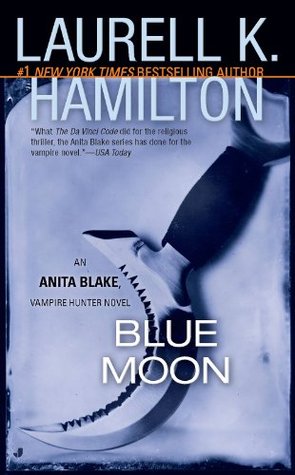 When she chose master vampire Jean-Claude over her ex-fiancé, alpha werewolf Richard Zeeman, Anita learned that sometimes love is not enough. But though she and Richard won’t be walking down any aisles, she can’t turn her back on him when he’s arrested on a rape charge in Tennessee. Anita knows firsthand that Richard has the morals of a saint—or at least a boy scout. But his guilt or innocence is not the issue. He’s behind bars, and in five days a full moon will rise…

MAJOR SPOILERS THROUGHOUT:
I really liked this book. It was fast paced and constantly had my attention. I did not want to put it down! There was plenty of action, intrigue, and some more vampire politics in this installment. While I did feel like some parts weren’t flushed out all of the way, I still found it enjoyable.
I like Anita for the most part. She isn’t my favorite character by a long shot, but I like her a lot more than I used to. I still think that she is stubborn as hell and I don’t agree with some of her choices, but I have learned to accept it.
I feel like Anita has always straddled the line between right and wrong and I have been 100% supportive of her self defense/killing people decisions this far. But… I feel like she crossed a major line in this book that I never thought she would. I honestly don’t know if she is the “good guy” anymore. The good guys don’t torture people for information, right? The good guys feel some remorse for their bad actions, right? I just don’t know anymore.
I am not the biggest fan of Richard, but I have come to terms with the fact that he is here to stay. There were a few times when I saw possibilities for other love interests besides Jean-Claude and Richard (Asher, Damian, Nathaniel, and Jason) and I am starting to wonder if this series isn’t going to end up being a reverse harem.
Overall, I really enjoyed this book. While this isn’t my favorite installment, I still had a fun time while reading it. I am very interested in finding out what is going to happen next so I will be continuing the series with Obsidian Butterfly.