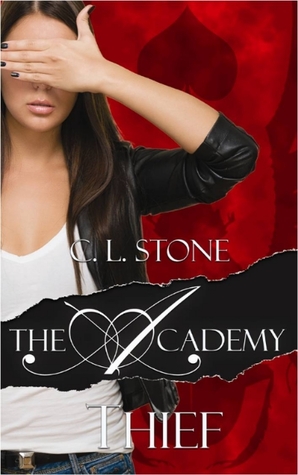 Kayli Winchester is a dirt-poor girl living out of a hotel, forced to be the parent for a drunken father and teenage brother who she’s desperate to keep in school. The only way she scrapes by is to utilize her one skill: pickpocketing. But even though she’s a thief she has a moral code: no kids or old ladies, only targets who can defend themselves. Not that they see her coming…

Thinking she’s been working under the radar, Kayli has no idea The Academy has been watching and taking notice. Now a team that needs her skill has offered her a way out of her predicament and it’s her last chance: work with them, or face jail time. Kayli resists at first, but slowly the boys reveal they can be trusted. With Marc, the straight man, Raven, the bad-boy Russian, Corey and Brandon the twins as different as night and day, and Axel their stoic leader, there’s a lot Kayli can learn from these Academy guys about living on the edge of the law. If only she can stay on the good side instead of the bad.

Especially when the job they offer her is more than any of them bargained for. After it’s done, the hunters have become the hunted and their target is now after Kayli. The Academy boys do their best to keep her hidden, but a thief like Kayli will never sit still for long.

Meet an all-new Academy team in Thief, the beginning of the Scarab Beetle series.

Warning: This is a new adult series. Readers of the other Academy series may need some caution as this series will contain mature sexual and violent situations and themes.

“I was hunting a thief, and I found a beautiful wreck.”

SPOILERS THROUGHOUT:
I really liked this book. I had read C.L. Stone’s other series, The Ghost Bird, so I was familiar with the Academy and some of its members beforehand. I had met Marc and Kayli previously so I knew a little about them going in.
A negative side to reading all of the Ghost Bird books first was that I knew certain things were going to happen before I should because of the Scarab Beetle characters and Ghost Bird characters crossing paths before. Some things were spoiled (Like Marc getting the nail from the nail gun in his leg) but that’s my fault for reading all of the Ghost Bird books first.
Kayli was a breath of fresh air compared to Sang. Don’t get me wrong, I love Sang to pieces, but it was great to have a leading female character who spoke her mind and would tell people off if she had to. While, I loved that about Kayli, it did cause her to get into a lot of trouble. Sometimes her mouth got away from her and caused her to bite off more than she could chew.
I am still kind of in the middle about the boys in this series. I think I had gotten used to my Ghost Bird boys and I think I had a lot of expectations going in. I love most of the boys in the Scarab Beetle series already but one of them (Kevin), I am not sure of yet. I think I went into the book automatically assuming all of them would be head over heels for Kayli like the boys were for Sang. While this does make the series more realistic, Kevin having a girlfriend can cause real problems in the future. Because of said girlfriend, it makes me wonder if Kevin is a love interest at all or if he will leave the team in the future. To be honest, Kevin didn’t have a big role in this book so I honestly wouldn’t care if he left the team. In my eyes, he is only causing division among the team and putting doubt in their and Kayli’s heads.
Another thing I liked was the opening chapter. It was honestly one of the best ones I have read in a while. It was so fast paced and fun that it immediately hooked me.
On thing I absolutely loved was The Ghost Bird Series references. My babies from those books were brought up multiple times and I loved every minute of it. There was even a particular scene where Kayli sees a blond haired girl (Sang!) get into a car.
I am wondering how the series is going to go with the romantic plot lines. In Ghost Bird, Sang is very inexperienced and doesn’t know that she is doing anything wrong by kissing a bunch of the guys. Kayli is different. She knows the world and while she might not be able to control her feelings, she does know better than to get involved with all of them. I believe this will provide an interesting dynamic and might also cause more problems for Kayli because her conscience will begin to way on her.
One thing I did like was how fast paced the romantic plot line was. It is the first book and Kayli has already kissed two of the boys (Marc and Brandon) and Blake. I love Ghost Bird, but the romantic plot is slow as Christmas. I believe it took Sang six books to kiss any of the guys. Kayli is already there and there were a couple of times that she almost kissed Raven and Corey as well.
I am also wondering where the Blake plot line is going to go. Before the end, Kayli did appear to have a real connection with him. This worries me that C.L. Stone might give Kayli more love interests outside of the team later on. I feel like that would drive a giant wedge between Kayli and the team. I’m praying that doesn’t happen. Overall, I really enjoyed this book and I can’t wait to continue on with the series.