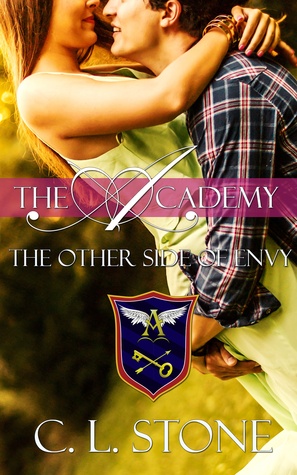 Sang Sorenson dreams of what life might be like for her in the Academy, but joining isn’t as easy as simply writing an exam or passing an interview. She’ll need to pull the team together to get them on her side in order for it to work, which is harder than it sounds. The boys will do anything to protect her, which, for some, means keeping her out.

But that’s not all that’s going on in Sang’s complicated life. After a shocking revelation, Gabriel Coleman splinters himself off from everyone, avoiding not just his Academy team, but even going so far as to avoid Sang. Desperate to bring him back and get him on her side, Sang digs deep into his past to try to discover a way to reach out to him.

His truth is riddled with tragic events, but with the help of Kota, Victor, Silas, Nathan, Luke and North, she might be able to reach out to him before envy and despair drag him too far down to be saved.

“All emotions have an opposite. Anger and sadness are two of the same. When someone is angry, when they calm down, you may discover they’re actually sad about some part in their life. Do you know what the other side of envy is?”
I shook my head.
“It’s a lack of confidence, self-esteem. If he envies Silas’s strength, then he’s unsure about his own. If he’s envious of Victor’s wealth and what he can give you, it’s because he’s insecure about his lack of money and ability to give you those material things. Gabriel’s greatest weakness is his own perception of himself.”

SPOILERS THROUGHOUT:
I really liked this book. While most people enjoy books with a bunch of action in them like previous books in this series, I prefer books where there is a lot of talking and communication. That was pretty much all this book was. Talking and talking.

I loved Gabriel. I enjoyed getting to see more of him and learning more of his backstory. He truly is a beautiful person. We got a little closer to Kota as well which I liked. I’m interested to see what will happen when he finds out about the agreement the other boys have going on.

Sang finally found out about the agreement and I was SO excited! She handled it better than I thought she would which is great. We also learned more of Sang’s past with that giant cliffhanger at the end. I really didn’t see that coming. After that, I can’t wait to read the next installment.