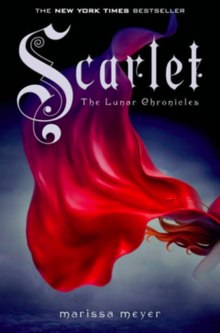 Cinder, the cyborg mechanic, returns in the second thrilling installment of the bestselling Lunar Chronicles. She’s trying to break out of prison—even though if she succeeds, she’ll be the Commonwealth’s most wanted fugitive.

Halfway around the world, Scarlet Benoit’s grandmother is missing. When Scarlet encounters Wolf, a street fighter who may have information as to her grandmother’s whereabouts, she is loath to trust this stranger, but is inexplicably drawn to him, and he to her. As Scarlet and Wolf unravel one mystery, they encounter another when they meet Cinder. Now, all of them must stay one step ahead of the vicious Lunar Queen Levana, who will do anything for the handsome Prince Kai to become her husband, her king, her prisoner.

I absolutely loved this book. I read Cinder a few months ago and I wasn’t a big fan of it. The plot was really slow to me and it didn’t get interesting until the last 50 pages. I kept hearing how great The Lunar Chronicles was and how it only got better so I decided to give Scarlet a chance. Everything that I had a problem with in Cinder was fixed in this book and I’m glad I gave the series another chance to interest me. Normally, when you first start reading a book, the first five chapters or so are boring because the author is setting the groundwork for the story. In this case, the whole first book Cinder, is the groundwork for the series. The story definitely took off in Scarlet and definitely picked up the pace. If you had trouble reading Cinder and you are on the fence about starting Scarlet, I highly recommend you read it. The second book is ten times better than the first and I can’t wait to read the third book, Cress! I have no doubt that Cress will be just as great, if not better, than Scarlet.